Coming up Nov. 6th the Mayor and Commission will vote in their regular meeting on the lane reconfiguration of Barnett Shoals. If you haven’t made it out the the east side of Athens lately the section of Barnett Shoals between College Station and Whitehall Rd. was reconfigured from a four lane road to a three lane road with a bi-direction bike lane that is separated with plastic posts. This bi-directional bike lane sits on the eastern side of the road next to the north bound lane of traffic. 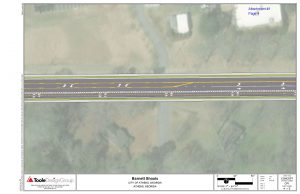 The Mayor selected a citizen committee and contracted to Tool Design group to come up with wonderful Athens Bike-Ped Master plan. Even better that was shown a vote of support by the commissioners in the October voting meeting. The group came up with some solutions for making Athens a safer more enjoyable community to navigate and live. Because the roads on the east side were due to be resurfaced the commission decided to try an experiment with Barnett Shoals. All it took was a bit of paint and since the road was going to be re-surfaced anyway it sets the stage for an interesting and in-expensive experiment.

While bi-directional bike lanes have precedent around the world as being one of the safest configurations possible this experiment has drawn the ire of many on the east side. The commission has been contacted by over 1000 local citizens on this and as I understand it has garnered more public response than any other issue on recent memory. A public forum was held at the Barnett Shoals firehouse a couple weeks after the change was initiated and people came out in droves to express their displeasure.

Some people were angry that the commission would do something to slow the flow of traffic of such a busy road. Others were confused of how to deal with bi-directional bicycle traffic when turning into the neighborhood off of Barnett Shoals. We now have to look behind us when making a turn? How are the postal workers and trash trucks supposed to service those houses? Big truck have a harder time making the turn onto Barnett Shoals. Others were annoyed that cyclist weren’t even using the lanes but preferring to ride with traffic.

After ACC revealed the data collected from the experiment it was shown that average speeds went from 47mph to 42mph…..on a 40mph residential road. Transit times were increased by a mere 16 seconds. A seemingly resounding success in creating a safer community going from a 4 to a 3 lane road.

Unfortunately the data reveal hasn’t stopped the negative opinion of the reconfiguration. The bi-directional bike lane that works so well in Platinum level cycling communities like Portland and Boulder in my opinion have stymied this experiment and may ultimately cause the commissioners to throw the baby out with the bath water.

Athens likes to think of itself as a progressive community but in terms of bike infrastructure we are currently behind Macon and Columbus Ga. We are decades behind Asheville, Chattanooga and Greenville. Because of that the Barnett Shoals bike lanes have nothing to connect to. They are sitting on an island by themselves. Because of this many cyclist don’t even use them, the recent data showing only 16 cyclist/day actually use the new lanes. Having to navigate to the lanes and then back off of them to re-integrate with traffic to make a turn on to East bound Barnett shoals is extremely dangerous. Your only other option is to use a sidewalk, which is inconvenient and illegal. I also sympathize with the complaint of many of the motorist that live in the neighborhood that now have to look behind them when making a turn into the neighborhood.

My opinion is that the best option is to keep the three lane configuration and simply add single direction bike lanes on either side of the road. I think this solves almost all of the motorist’s issues, gives the residential community the safer road it deserves and gives the cyclist a place to ride. This also requires nothing more than repainting the road differently after its resurfaced.

Unfortunately commissioners Harod and Dickerson who reside in this district are calling for a Mayor and commissioners defined option. Their idea is to immediately return Barnett Shoals to a four lane road with an idea to create a separate multi use path sometime in the future. Unfortunately this returns the road to 47mph average speeds in a residential area and takes away a safe place to ride a bicycle. If a multi purpose path was ever created it would cost $100’s of thousands and would be less connected than the bi-directional lanes are currently, of no particular use to cyclist and of no particular advantage to pedestrians who currently have a sidewalk that they don’t have to share with cyclists.

I you live on the east side of Athens and ride and drive this road every day like I do please write your commissioners and tell them how you feel.

Have a different opinion? Let us know!

No time to bring your bike to the shop? No problem!

We'll pick it up, fix it, and deliver it!

To request Pickup or Delivery, please fill out the following information.

To schedule a fitting or sizing, please fill out the information below.

To schedule a service or repair visit, please fill out the information below.